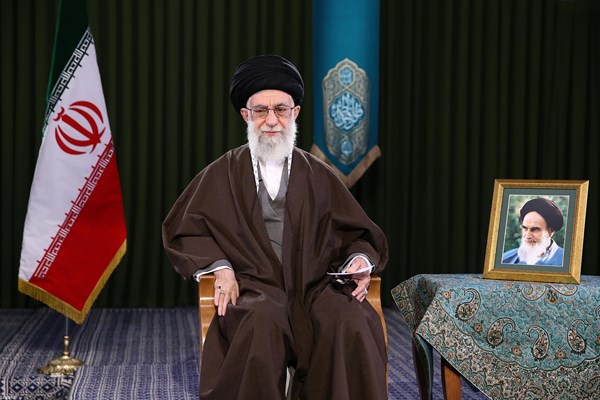 Ayatollah Khamenei issues a message on the occasion of the Iranian New Year.

Leader of the Islamic Revolution Ayatollah Seyyed Ali Khamenei issued a message on the occasion of the beginning of the Iranian new year of 1396 (March 21, 2017-March 21, 2018) on Monday. In his message, the Leader congratulated all his compatriots and Iranians, especially the venerable families of martyrs and war veterans, on the birth anniversary of Hadhrat Fatemeh Zahra (PBUH), the daughter of Prophet Mohammad (PBUH). Wishing a year endowed with blessings, security and welfare for the people of Iran and Muslims across the world, Ayatollah Khamenei called the Iranian New Year the year of “Economy of Resistance, production and job creation.”

Ayatollah Khamenei noted that the preceding Iranian year was marked with bitter and sweet developments, and while referring to some of the most important reasons for happiness of the Iranian nation during last year, said, “The dignity of Iran and the identity of the dear nation was evident in all cases [that happened] during the [Iranian year, 13]95 (ended March 20, 2017), and enemies throughout the world owned up to the power and grandeur of Iranian nation.”

The Leader of the Islamic Revolution noted that the “enthusiastic and zealous” participation of Iranians in nationwide demonstrations on the 22nd [day of the Iranian month] of Bahman (February 10, 2016) in response to an affront by the new US president, and also people’s high turnout in nationwide rallies on International Quds Day were indicative of the identity and lofty goals of Iranian people. The Leader then said, “Despite the fact that Iran's neighboring countries and other countries in the region are plagued with insecurity, security of the county in the chaotic regional and international environments was a very important index and the Iranian nation experienced ‘sustainable security’ throughout the year.”

“Perseverance of the youth,” and a “widespread faith-based movement” were two other indices, which were pointed out by the Leader of the Islamic Revolution when explaining the achievements and advances of the Iranian nation during last year. The Leader said, “Observing and being informed of the energetic and innovative scientific, cultural, production, and sport activities by thousands of young groups across the country, and holding of enthusiastic and effective religious sessions and activities are among positive and exhilarating points for our country and nation.”

Ayatollah Khamenei then noted that all the bitterness and hardships of last year were related to people’s economic and livelihood problems, especially problems faced by the lower and middle classes, adding, “I am aware of the [economic] state of people. Therefore, I feel with my entire heart the bitterness that people, especially the lower class, are experiencing as a result of such economic problems as ‘high prices, joblessness, discriminations and inequalities and social maladies’.” The Leader noted, “We are all responsible [for improving this situation] and must answer both before the Almighty God and before the nation.”

The Leader of the Islamic Revolution stated that the previous Iranian year had been designated as the year for taking “practical steps and action,” adding that concerned officials had submitted a report on the activities carried out in this regard. “Of course, there is still a long gap between what has been done and the expectations of people and the Leader, and [this is why] positive and negative figures [produced by officials] should be taken into account in their totality,” Ayatollah Seyyed Ali Khamenei noted.

Elsewhere in his remarks, the Leader said merely paying attention to the rubric, “Economy of Resistance,” was not enough on its own. Explaining the best solution and remedy for the current economic situation in the country, the Leader of the Islamic Revolution said, “The remedy is to divide the Economy of Resistance into key and important points and have all officials and people focus on those points. These key points include [bolstering] domestic production and especially creating jobs for the youth.”

Based on this very necessity, Ayatollah Seyyed Ali Khamenei called the Iranian New Year the year of “Economy of Resistance, production and job creation,” and said, “Focus on and planning for these key points is what the Leader and the people demand officials and it will be the cause of remarkable and tangible achievements, and officials must report the results [of their efforts] to people at the end of the year.”

message on the occasion of the Iranian New Year