New year the year of more development, employment for youth/We achieved considerable industrial, We must stand together to have honourable Iran 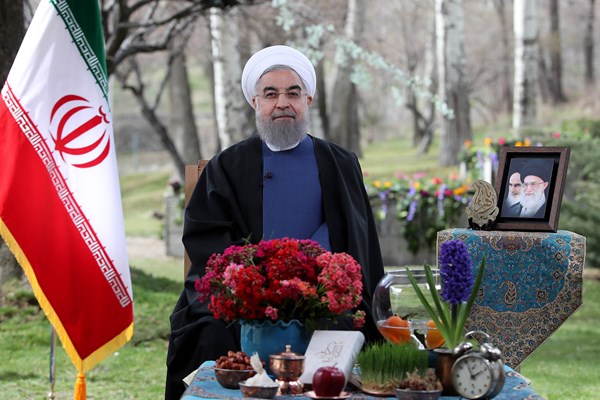 President Rouhani congratulated the advent of the new Iranian year, 1936, to the Iranian nation and described government’s achievements in harnessing inflation and bringing economic growth and employment in year 1395 as unparalleled.

In his televised message to the Iranian nation on Monday, Dr Rouhani expressed hope that the new year will be the year of progress and development, as well as employment of the youth.

In the Name of Allah, the Most Beneficent, the Most Merciful

Praise be to Allah, and blessings be on His messenger, his family and his companions

I congratulate the auspicious Nowruz festival to the great Iranian nation, Iranians residing outside of the country, and all nations of the region that celebrate Nowruz, to the families of martyrs, wounded war veterans, prisoners of war and all veterans, especially to those who are serving the Iranian nation in the society, borders, and healthcare and relief services instead of being at home with their families.

This year we have a year full of blessings because it is concurrent with the birthday of H.H. Fatima al-Zahra (AS) and heavenly and divine blessings. God-willing, we will follow the path of unity and empathy and efforts for our country’s pride.

Year 1395 was the year of both implementing “Resistive Economy; Action and Deed” and the implementation of nuclear agreement; and these two had a positive role and effect for us.

I deem it necessary to appreciate the dear farmers for their efforts in increasing agricultural products and contributing to wheat self-sufficiency.

I also thank workers and industrialists for the considerable growth in industrial production, increasing production of some products to two times more than last year. In this year, with the help of banks, 24000 industrial units were activated.

I thank the oil industry engineers and workers for their extraordinary efforts in doubling oil and gas condensate production.

We were able to reclaim our rights and regain our position in the oil market with oil diplomacy and efforts of you engineers and workers.

It was because of these efforts that we achieved the 8-percent economic growth rate for the first time after the 20-year outlook document announced by the Supreme Leader.

I deem it necessary to thank doctors and nurses for taking medical services to the outskirts of towns and rural areas; and this is why our people are being treated in hospitals with less cost than before.

I also want to thank teachers, professors and the educated for making us proud among all developed countries.

I see it necessary to appreciate athletes and artists for bringing us international and domestic honours and national pride. I also want to thank our dear women, one of whom won a medal in the Olympics for the first time.

All of these brought happiness for our dear people in year 1395.

Of course, we had some bitter incidents and shortcomings in 1395: the train incident, Plasco building fire, dust in some provinces, floods and other issues for our dear people. We also lost Ayatollah Hashemi Rafsanjani who was the longstanding companion to the Revolution.

We could increase wages and salaries of workers and employees to more than the inflation rate and this means that our people can have more welfare.

Both in year 1395 and year 1394 our non-oil exports were more than our imports. Therefore, we need to say bravo to all entrepreneurs and exporters for making our nation proud.

In the new year, people should be able to use the cyberspace for acquiring knowledge, science, information and promoting their business. This was one of the efforts of the 11th government and we will continue along this path.

The cyberspace must be as secure place for our people and we are seeking to eliminate the security atmosphere in cultural and social fields, replacing it with brotherhood, friendship and kindness.

During last year, the Charter of Citizens’ Rights was published as it was promised before. This year, we will implement and put the charter in operation.

The new year will be the year of development of transportation, in railroads in five provinces, in our fleet of airliners, maritime transportation, and transit with different countries.

In the new year, we have two important elections ahead of us. We all must try to have a more active role and presence. We must turn out in large in healthy and legal elections.

In the previous elections, there were times that we had moral shortcomings and we need to compensate for the shortcomings. The difference between elections in the Islamic Republic of Iran and other countries must be in the field of moralities and proper social atmosphere.

God-willing we will join hands and have very good elections. I hope our dear country be safe in the current year and coming years; I hope our dear and proud people of Iran live their lives with more unity and economic prosperity.

Peace, mercy and blessings of Allah be upon you all

President in a Nowruz message